In this size (less than 300 pixels) you can no longer view the page seriously. Please turn your device by 90 degrees.

The dog – Pet and soulmate 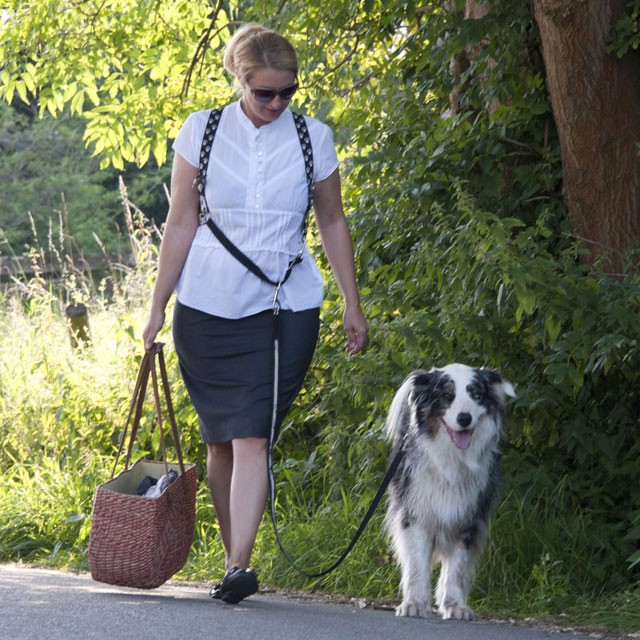 Man and dog have been a well-rehearsed team for thousands of years. As hunting companion, protection and herding dog and in the recent past also in an official capacity as therapy, rescue and police dog this symbiotic connection has survived all eras and trends. The dog is friend, often soul mate, companion and protector. With its differentiated sensory perceptions it compensates for our inadequacies and reliably assumes the role intended for it. Despite all the criticism concerning the breeding of the countless races, there have been moments of light in the human genus to develop real partnerships in respect with the nature of the dog.

Today, the dog is a permanent member of society, especially city dwellers bring a piece of the original way of life into the house with him. But every benefit also brings with it the responsibility of the dog owner to ensure a species-appropriate existence. In addition to correct feeding, an extensive exercise programme is part of everyday life - for the benefit of people and animals. Depending on the breed characteristics, the daily walk with the dog requires a few kilometres in changing tempi – the wolves, ancestors of all dogs, often hunt for days, cover long distances and pursue their victims to exhaustion by rushing them. This is how even giant bison bulls are brought down with team spirit. The future family dog should therefore be chosen carefully; adapted to the needs and possibilities, it is in the own interest to pay attention to child-friendliness, strong nerves and specific breed characteristics.

Also and especially rescue, police and therapy dogs must absolutely satisfy their need for movement in order to stabilize their sensitive, but absolutely balanced nervous system, because their sensory perceptions are extremely strained. The frequently demanded permanent holding work of the dog owner‘s shoulder is not without danger: In the daily practice of an orthopaedic therapist, there are always cases of diseases of the locomotor system, which, if analysed carefully, can be explained mainly by overloading due to poor line guidance of the four-legged companion. "The shoulder joint is a subtile structure of differentiated muscular guidance. It does not appreciate one-sided holding qualities, such as those found during long dog walks!" Prof. Dr. Frank Duesberg, Specialist for orthopaedics and for physical and rehabilitative medicine from Solingen, Germany, sees many serious shoulder and spinal column findings in his practice, which, in addition to the classic one-sided strains at work and at home or due to accidents, can also be traced back to years of tensile stress using dog leashes and their more or less trained mates at the other end. 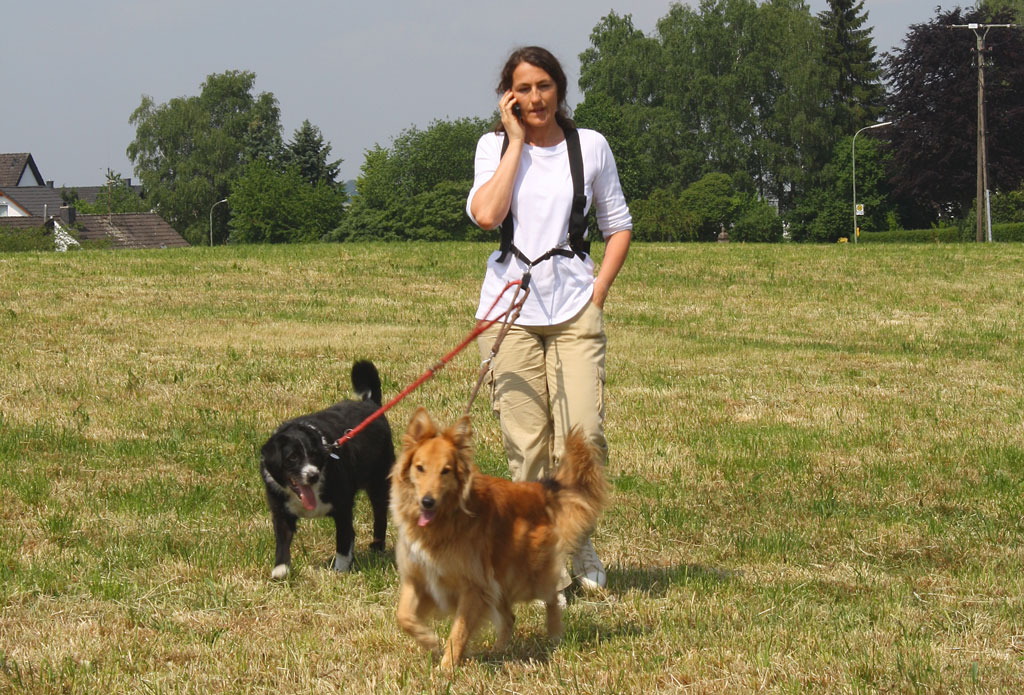 Apart from the inappropriate combinations of dog and owner such as a low weight 50 kg woman with Great Dane or Rhodesian Ridgeback, however, there are usually the quite natural consequences of the dog man, exhausted from work, encountering his completely underused dog, who spent the whole day in kennel or apartment. Since the opportunity for free running in the big cities is too small, but the surplus energy has to go somewhere, dogs move here and there, speed up, then suddenly stop to get to know the newest rival by snooping information. Masters or mistresses follow willingly in their own world, without concentration on all ever learned dog handler advice.

For some time now, you can see belts that are wrapped around the waist to keep your hands free: for cycling, telephoning, pushing the pram, shopping - originally developed for sporty running with a dog. Certainly practical, but dangerous to health, as a jolt or continuous pulling in the area of a single spinal segment can damage it considerably. There is also increased stress on the kidney tissue, which is exposed to the continuous pull with little protection. 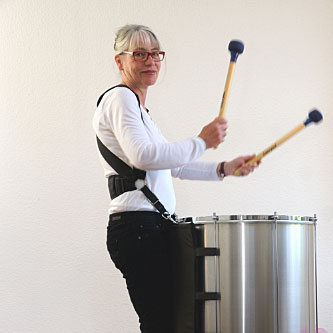 A carrying system originally developed for the music scene offers the solution: The MAX belt system was designed for carrying larger percussion instruments. Instead of the downward pulling load, the distribution of forces by means of a vest-like belt system allows for an upright posture, which achieves a stretching effect in the area of the thoracic spine and thus significantly optimizes the activity of the back muscles. An upright and stable spine improves concentration and energy balance, the endurance strain is less tiring, and the joy of music is retained.

The industrious inventor used her patent to offer dog owners a safe and healthy alternative to conventional dog leash solutions. The key experience was a young mother, with dog and child on her hands, bouquet of flowers pressed under her chin, looking for her car key in the depths of her handbag. The child stumbled, the dog broke free and ran in front of the MAX-inventor‘s car. Fortunately, it was able to slow down in time, but it is not an art to develop a horror scenario of a different outcome in your mind‘s eye. 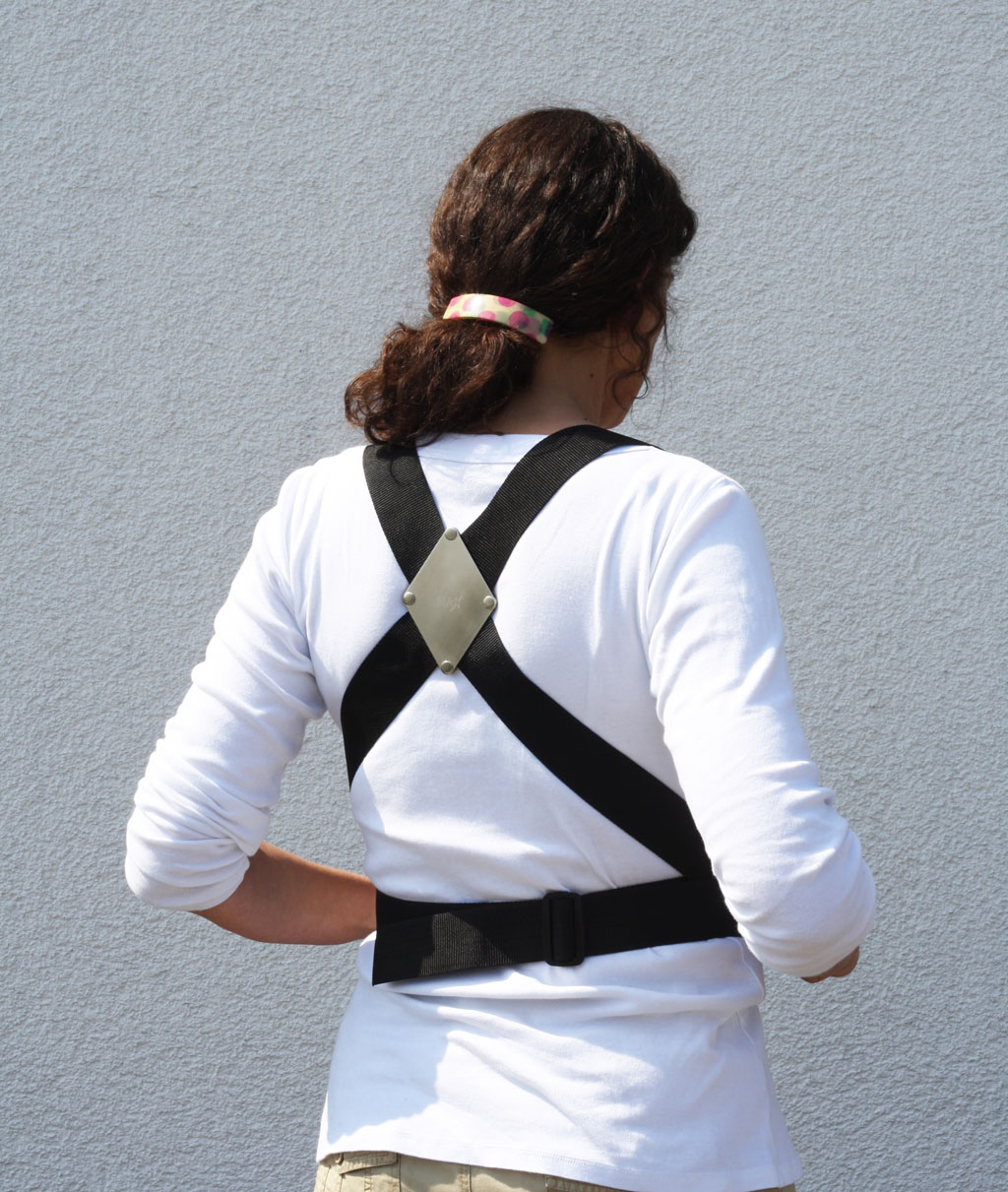 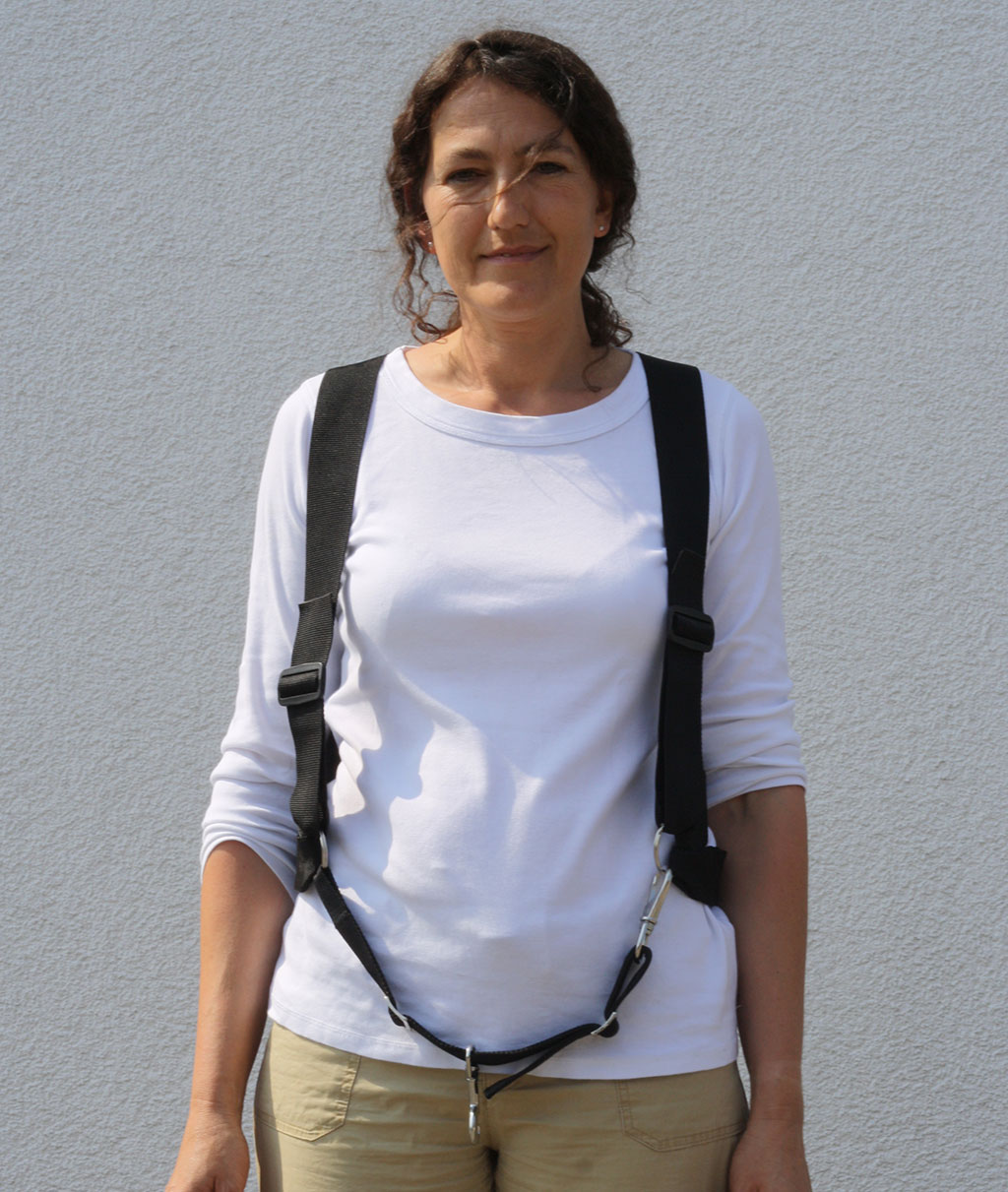 The central idea is that of a comfortable and light backpack carrying system, which distributes the forces so cleverly via a chic metal plate in the back area that the impulse of the dog‘s movement has a reactive stabilising effect on the thoracic spine. The actually stable bony anatomy of the thorax experiences an erection impulse, so that the dreaded hunchback position is counteracted. The hands are free and can act as a fine motor corrective, the non-verbal commands reach the dog in a much more differentiated way. 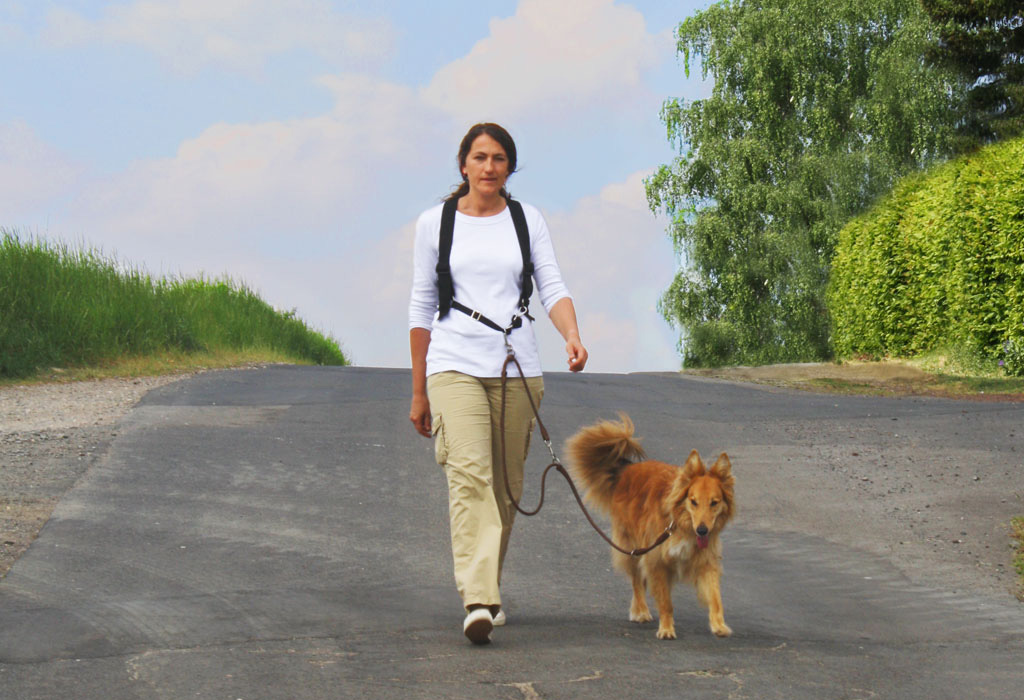 Even the wheelchair user as dog handler can receive uprighting and activating impulses, which promote free seating and, in addition to the direct effect on the spine, also stimulate reactive dynamic stabilisation of the pelvis and legs. The belt system is individually adjustable and relieves the body areas susceptible to injuries in a targeted manner. It is possible to lead several dogs, for particularly strong breeds a panic hook can be used instead of the usual carabiner. To defuse tricky situations, the dog can be released in this way from the MAX harness immediately and without effort. 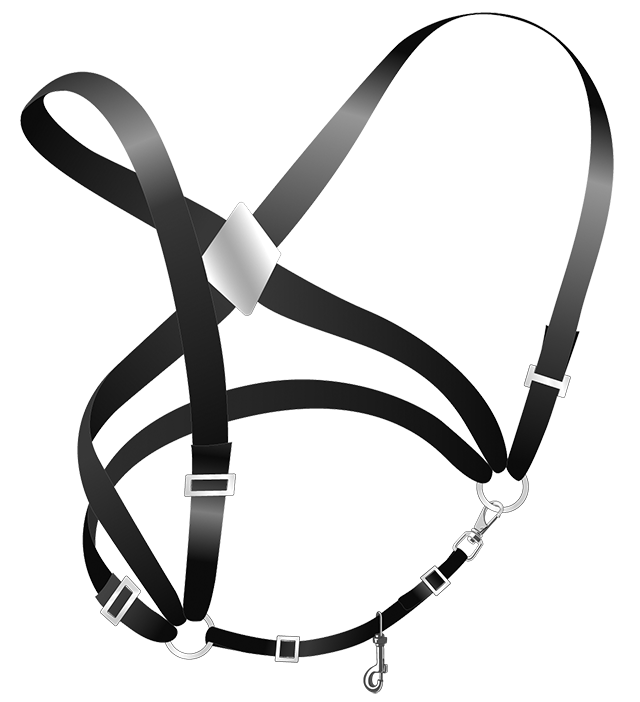 The MAX harness is suitable for effectively relieving the sensitive shoulder, arm and spine regions and ensuring a training effect on the back muscles, which counteracts the incorrect strain on the thoracic spine caused by everyday life. The hands and arms can swing freely and allow a quick and harmonious sequence of movements while walking. Today, Professor Duesberg often recommends this variant of the dog guidance, and satisfied because pain-free dog owners look forward again to the daily adventures with their four-legged friends.

I would like to thank the authors Professor Dr. Duesberg and Mrs. Eichler for allowing me to publish the article on my homepage.